Defining Bulky, Once and For All

By Leigh Peele, In Research & Controversy

(This article has been updated since its original publication. I have made general editorial edits but also added new information. Before you read this article, you need to understand no “look” or body type you desire is wrong. This article is not about knocking the “skinny girl” or “bulky lifters.” The purpose of this article is to provide a “definition” based on current dialogue of what the average population believes to be bulky, not the lifting population. What you choose is your personal journey.)

In New York during the early 1900’s, there was a “women’s only” weight lifting group. They met privately in a rundown gym after closing hours. The janitor would let them in and they would train with tremendous intensity and passion. They would leave and return to their families and husbands, never saying a word about where they had been or what they had been doing. It is no secret weight lifting for women was not only unpopular, but severely looked down upon by society at that time.

100 years later the world has new (and not so new) perspectives.

Times have changed. Today, women routinely lift weights in many parts of the world. The amount of weight they lift is a subject of interest and controversy and the focus of this particular article.

In the commercial gym circuit, we often see women lifting 3-5 lb weights or performing non-weighted floor exercises. These exercises do not challenge the maximum strength ability of women. Challenge meaning the difference between a one armed body weight push-up and 3 lb tricep kickbacks.

When it comes to gaining strength or hypertrophy (size with strength), there is one undeniable fact—you need an extreme amount of resistance. You do not achieve a 500 lb deadlift because you randomly decide to pick it up one day. Over time, you have to steadily increase the load amount of the weight you are lifting. This is irrefutable. While there are arguments regarding what rep range is the best for hypertrophy, it is generally accepted that going heavy means adding mass.

What is questionable and undefined is—what determines “bulky?” When a woman moves out of the 5 lb dumbbell range, she wonders, “Will lifting this heavy weight make me bulky?” “Am I going to add mass I do not want?”

When I entered into the health and fitness industry, I started off like a lot of people when looking at bodybuilders and figure competitors. I am not going to lie, at first I was turned off and largely uninterested in looking at any of them. I didn’t quite understand why a man wanted to show that many veins or why a woman wanted large biceps and no breasts. As time went by and I evaluated these bodies more and more, and as I trained people and helped them achieve that look, my viewpoint changed.

The perceptions I had of what fat, lean, large mass, and small mass are, are completely different now. I have a broader view of what attractive, strong, and pretty are to me. People get comfortable seeing a certain type of look and style and it can start to alter how they see reality. Thankfully, I have a decent head on my shoulders because, for my job, I have to be highly critical of body fat levels, muscle build, etc. I could easily have skewed perceptions as so many people do.

I took a poll of 2,000 women online. I asked the following questions…

(Participants were college educated, between 21-45 years of age, and of moderate to higher income. Both single and married women were included. Some statistics vary because questions were skipped.)

How many times per week do you exercise?

Do you lift weights that you consider to be heavy?

Do you think that muscles on women are attractive?

Do you think that men like muscles on women?

Do you think that women like muscles on other women?

Of the women listed, whose body do you like looking at the most?

Of these women, who do you feel defines muscular/bulky how you define it?

Would you rather appear…

If you thought that lifting heavy weights wouldn’t make you bulky/muscular, would you lift them? 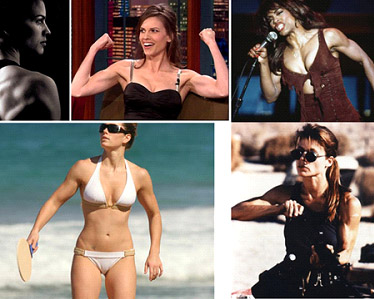 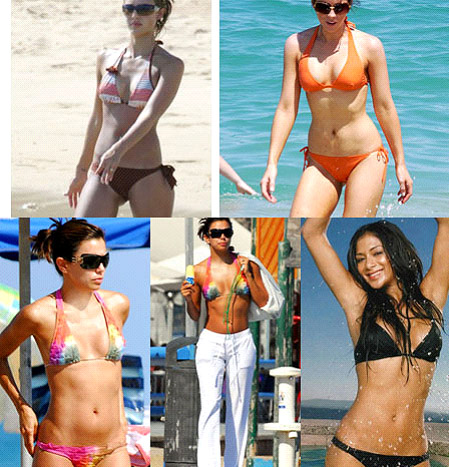 Below are some interesting bullet points to take away from this survey:

Do these 2,000 women speak for the world? I personally think they do, and the results are pretty close to what I would have predicted. Now, the question is…

Are these women wrong about what makes them bulky? What does this mean for women who have more muscle and definition than the women shown above? Will lifting heavy weights equal bigger muscles? If these women think Jessica Biel and Hilary Swank look bulky, then the answer is yes they do. An additional point to consider is that Jessica Biel has atrophied to a smaller size for her career since that photo was taken.

Maybe I was lucky or maybe it was fate that brought the “Outback Jack” marathon to my living room on a Sunday afternoon. To give you a brief summary, “Outback Jack” was a dating show in which a group of girls were dropped in the middle of the Australian Outback to meet the man of their dreams while enduring the surrounding environment. If that isn’t entertainment, I don’t know what is.

During the course of these episodes, a challenge was brought forth to the five remaining girls. Five new girls were brought in to race through an obstacle course against them; these girls were nicknamed the “Amazons” due to their “bulging muscles” and “butch” bodies.

The problem with most trainers is that they don’t make any sense. They tell you that, “Lifting heavy won’t make you bulky,” and then turn around and say the magical phrase, “Don’t worry that the scale hasn’t dropped. You have lost fat, you’ve just had some muscle gain too!” They say, “Women can’t gain muscle! They don’t have the testosterone or genetics,” but then claim, “On my programs women can make great gains in muscle and strength!”

My favorite contradiction is that the majority of the male trainers telling you to lift heavy and not be afraid of weight are the same guys putting up pictures of “smokin” models and actresses that have most likely never picked up a real weight in their life. Just a little something for you to consider.

Most women can gain a certain amount of muscle, but there is a tapping point. Beyond that point, it takes a long time of effort, eating, and dedication to achieve that next level of gain. After that, it takes drugs. The problem is that years of training can lead to gaining more muscle than some women want, especially if their diet isn’t what it should be. Their body fat didn’t allow them to see what they were gaining. If this is the “look” you want—great. However, if this isn’t the body for you, you won’t be happy with the results.

The majority of women do not have the bulky muscles they think they do. A lot of women never get lean enough to see what is actually there; your body fat levels are too high to show any definition. Mix that with a lifting program and you end up looking fatter but firmer. I should note that some like this look. Remember nothing is “wrong” here.

Take the “Amazon” women on our “Outback Jack” show for example, and note that most of them just have higher body fat levels and tight traps. This is what the majority of women think of when they are “bulking up” their own bodies. They may or may not be bulking up, but they are “plumping” up. Word to the wise—if you train women, most don’t want to look plump.

Instead of avoiding the issue, you need to confront it. If you are a trainer or the trainee, you need to clearly explain what is happening instead of feeding yourself or your client a bunch of nonsense. The majority of the time the fix is in less body fat overall. Madonna, for example, has a decent amount of muscle for her age along with low body fat, yet she was still considered less bulky than the bodies of Biel and Swank. Why? Likely because their muscle was under a thicker layer of body fat, showing a less desirable look to the survey participants.

Before you accuse muscles of being the culprit, take a look at body fat.

What do we do now? Where do we go from here?

I hope this helps you understand and communicate better with yourself and others. Always remember that “normal” isn’t normal anyway, and everyone can have their world view changed when their world does.