Consistency: How a Pattern Shapes Your Outcome 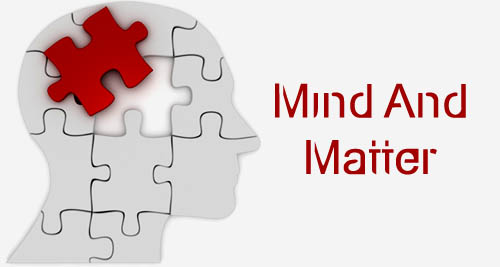 What is the first thing that pops into your mind when it comes to consistency?

Malcolm Gladwell sold copy after copy of his book, “Outliers,” because of his assertion that it takes 10,000 hours to become an expert at something. Agree or disagree, that has been the most consistently quoted and discussed section.

Usually when people think about the action of consistency, they think of it in a positive manner. People think that being consistent can only bring about good things. What I am going to explain is the full potential and danger that consistency can have, and how there are patterns for everything you do, whether positive or negative.

Jame Bailey was born in 1979 on a day so cold the the hospital kept losing power. He almost died due to complications from his birth; twelve hours after he was born his mother passed away. His father was not involved so he was taken care of by various relatives.

Thirteen years later, I saw James behind the gas station at the end of my street. He had stolen watermelon wine coolers, Kool cigarettes, and was playing on a Game Boy. I walked up to him and he said, “Hey, do me a favor will ya? Poke your head around the corner and tell me if the tall, skinny guy is still working?”

I stuck my head around the corner and a very large, wide woman I referred to as “Pirate Helga” was working. Yes, I really called her that. I was eleven years old, give me a break.  I called her that because she was the size of a gladiator and was always squeezing one eye shut so she could hold onto the cigarette she had hanging from the corner of her mouth.

I said, “Nope, he isn’t working.” James shrugged, said thanks, and gave me a few wine coolers for my trouble. I sat down and he told me how he was going to become the next video game champion. He was certain he was going to escape our neighborhood and get paid to play video games.

This was a common dream of a lot of people where I grew up. In my area, kids would carry their game stations from house to house and have playoffs. Every couple of weeks there would be a different tournament depending on the game. It is safe to say most crime that occurred within our few blocks by kids was because a new video game was released. And really, only one or two copies were needed because the kids shared them so this system ended up working well for most of them.

James was the king of these mini gaming tournaments. Whenever I saw him he was playing a video game or trying to steal something in order to buy a video game. When he was 14, he made it out to California for a NBA Jam Tournament.

But as the years went by, James spent less time gaming and more time getting into trouble. Bad things kept happening to him and his tightly-held hope in positive change just kept decreasing. At 17, he ended up in jail for a few years because he stole a car and ran from the police. I have no idea what he is doing now, but the last thing I heard was that he had been in and out of jail a few more times.

The take home point is that James allowed his bad habits to overshadow his hope. He let one of the few positive things in his life fade away. He became consistent but it was in committing negative acts toward himself and others. It paid off; the dedication and focus he put into becoming a full time thief and putting aside the dream he had for his future landed him right where his 10,000 hours should have.

Who you are over and over again is who you are.

Brief victories are just that—brief. That doesn’t mean there are not moments that can create a lifetime of better habits, but as a whole, it is who you are each and every day that counts.

Some of the worst quotes ever recorded for posterity were about consistency. Here are two examples.

Consistency is the last refuge of the unimaginative.

Too much consistency is as bad for the mind as it is for the body.

Closed minds you have there, Wilde and Huxley.

What, then, is the true Gospel of consistency? Change. Who is the really consistent man? The man who changes. Since change is the law of his being, he cannot be consistent if he is stuck in a rut.

Consistency itself isn’t boring. If you are boring all of the time, you are consistently boring. Please quote me on that.

You can shape your consistency to be whatever you want it to be. You can be consistently amazing, strong, lean, smart, and confident. You can consistently be who you want to be, and it is in that very consistency that takes it from being a fluke to being one of your defining characteristics.

Using these three exercises will help you get there that much faster.

Do you remember when you were a kid and your teacher would have you write your name vertically on a piece of paper and then next to each letter you had to write a word that describes you? It might seem a bit cheesy but it can be more telling of how you see yourself than you think.

I had a client do this two years ago and then again recently. 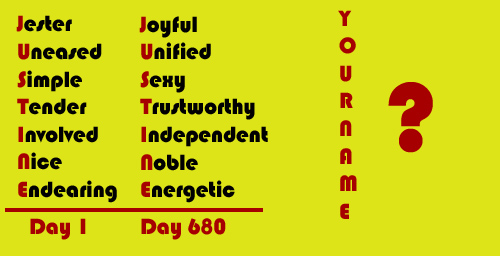 The positive changes she has undergone seems pretty obvious to me, even on subtle levels. Why? During the span of those 680 days, Justine was consistently working on bettering herself. She was consistently working to define her identity and figure out who she wanted it to be. She did 20 name drafts between day 1 and day 680, and this is the one she keeps in her wallet as a reminder of how far she has come.

List five things on each side. Don’t overwhelm yourself with 101 things you want to change. Five things you no longer want to be consistent doing and five you do.

How was I consistent today?

Write it on a post-it note or print out this post if you have to, but never stop asking yourself this question. Pick a time of the day that works for you; I prefer mid-day better than at night because there is still time to change the outcome of that day.

Never try to sort through your day at bedtime. Doing that is a step toward self-loathing and regret. It gives way to phrases like, “Tomorrow is a new day” and “Everything will look better in the morning.” While these sayings serve a purpose regarding hopefulness, they do not encourage action.

Remember that your answers need to be realistic and honest. You have to acknowledge the good along with the bad.

It does not matter if you have one answer or ten; just make sure you are being real with yourself. My final question for you right now is: