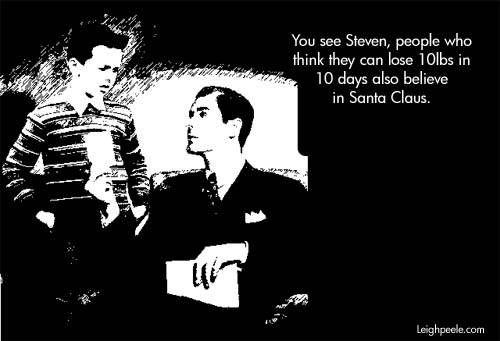 [Disclaimer: It is sad I need one, but obviously people can’t read. This post is a mathematical example of how practically impossible and unsafe it is to lose 10 pound of pure fat in 10 days. Please read what I wrote before leaving your comments.]

I wanted to give you some food for thought the next time you pass a newsstand and see a magazine making the claim, “Lose 10 pounds in 10 days!”

An estimated 60 to 85% of the weight of white adipose tissue consists of lipids with 90 to 99% of that being triglycerides. The remaining weight is made up of water and a slight amount of protein. The weight of one pound of stored lipids is roughly 400 grams. If we know through other calculations that fat energy is 9/kcal per gram, then it’s time to do a little math.

No matter what your beliefs are regarding carbphobia to fat hate, you can’t dispute the amount of energy in stored fat. To remove that energy, you have to be in a deficit of that caloric amount (actually more) in order to remove a pound of fat. Since there is no way in ensure 100% energy consumption in fat, this would take more energy expenditure than 3,500 calories.

In order to remove 10 pounds of pure fat in 10 days, it would take an excess of 35,000 calories. To give you some perspective on the severity of that, here are a few more numbers.

Next time you see gimmicks and headlines on web pages or magazine stands, do a little math and have a laugh. If lost in the shuffle—this may help.

# how many calories in fat, how to lose 10lbs in 10 days, white adipose tissue
Share on :